Dr Helen Mason is an Emeritus Reader in Solar Physics at the Department of Applied Mathematics and Theoretical Physics. She has been based at Cambridge University for over 40 years. She obtained a BSc (First Class Honours) and PhD at the University of London. She has taught at Cambridge University, London University and for the Open University. She was a Tutor at StEds for many years and was Senior Tutor from 2006-2011. She has also served on almost all the College committees. (Photo credit: Henry Kenyon)

Helen’s field of research is solar physics, in particular the ultraviolet and X-ray spectrum of the Sun. She has worked on many joint UK, NASA, ESA and Japanese space projects including SoHO (Solar and Heliospheric Observatory), Hinode and SDO (Solar Dynamics Observatory). Solar space observations have completely changed our view of the Sun. Helen is still an active solar researcher involved in collaborations with colleagues in Europe, the USA and India.

Helen has always been keen to convey her passion for solar physics to the public and school students. She has given many lectures at schools. In 2013, she gave one of the Friday Evening Discourses at the Royal Institution. She has written articles for science magazines and participated in many radio and TV programmes, for example the BBC program ‘Seven Ages of Starlight’.

Helen is also keen to promote education in developing countries. She has visited South Africa twice to work on astronomy projects with teachers and students in the former townships. She has also worked extensively in India, with schools in Pune, Maharashtra, and the rural areas of Tamil Nadu.

She has produced an educational web site for teachers and students (11-16 year old) called Sun|trek (www.suntrek.org) which has been used extensively in the UK, USA and worldwide. Her outreach work was recognised in 2010 when she was nominated as one of the six ‘Women of Outstanding Achievement’. In 2014, Helen was awarded an OBE for her services to Higher Education and to Women in Science, Engineering and Technology.

For the past five years she has led the SunSpaceArt project (sunspaceart.org), a team of scientists and artists, funded by the Science and Technology Facilities Council. Her team have run workshops in many schools (for children aged 7-14 years old) and led family activities, reaching around 10,000 children and 1,000 teachers nation-wide. The feedback has been superb. In 2018, Helen was awarded the Royal Astronomical Society’s Annie Maunder Medal for Outreach. In 2021, the SunSpaceArt team was awarded the Sir Arthur Clarke Group Award for Space Achievement in Education and Outreach.

Her photo portrait now hangs in the Garden Room at college, alongside other Life Fellows. 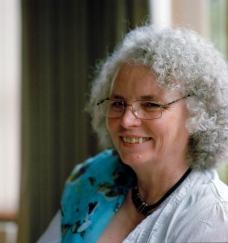