Judith Bunbury is Senior Tutor at St Edmund’s and Teaching Associate in Earth Sciences. Her current research takes her to Egypt and Sudan to bore mud in the Nile Valley, kick up dust in the deserts and descend tombs in the Valley of the Kings.  Judith collaborates with a number of archaeological teams in Egypt to deduce ancient environments around sites from the tiny pieces of archaeological evidence contained in the muds and sands of the Nile Valley and deserts.

Her work with her students and Angus Graham (Uppsala University) included a study of the temples of Karnak in collaboration with the Franco-Egyptian Centre (CNRS), Jean Jacquet, Betsy Bryan (Johns Hopkins University) and another of the Memphis and Saqqara area (with David Jeffreys (UCL).  Other projects also included work with Mark Lehner at the Giza Pyramids, Vivian Davies and Neal Spencer (British Museum) at Edfu and Kom Firin, respectively.

Current projects include exploring the landscape development of a town in Middle Egypt; Shutb, known in antiquity as Shas-hotep with Ilona Regulski of the British Museum. This town has also, through creation of dykes and irrigation basins, itself contributed to landscape change and we are working with local communities, film-makers and school-children to deepen perceptions of Shutb’s rich cultural and archaeological heritage. Investigations with Marine Yoyotte of IFAO at Gourob have also incorporated training of students in ancient landscape interpretation.

A number of students from UCL, Cambridge and Cairo Universities among others have joined Judith in her research and her recent PhD student, Pedro Goncalves of the Archaeology Department has conducted an in-depth study of the development of landscapes around Memphis. These teams have revealed the extent of landscape change across Egypt and are the subject of a forthcoming book for CUP that collates observations from more than twenty sites across Egypt and into Sudan.

Recently her interests have extended to the deserts; including Kharga Oasis where, under the Directorship of Salima Ikram on the North Kharga Oasis Survey, she has been exploring the effect of climate change on ancient Saharan Lakes. In the Theban area she is working with Piers Litherland of the New Kingdom Research Foundation as Deputy Mission Director in an exploration of Holocene Climate and Landscape Change in the Theban Mountain and the effect on access and use of the desert for settlement and transport. The latter project is complemented by geological work with Anke Weber of Humboldt University on KV11 in the Valley of the Kings.

Judith is also a member of the MacDonald Research Institute and the MacBurney Geoarchaeology Laboratory. Her teaching includes landscape and climate change at UCL and in the Department of Archaeology at Cambridge as well as, in her capacity as Director of Studies (Earth and Materials Science) at Corpus Christi College, Cambridge, geology and petrology in the Earth Sciences Department 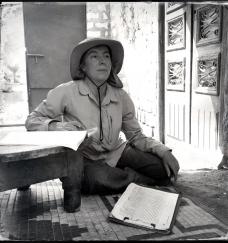