Professor John Loughlin was elected a Fellow of St Edmund’s College in 2010 and shortly after was appointed Director of the College’s Von Hügel Institute. He is a Senior Fellow and Affiliated Lecturer in the Department of Politics and International Studies, University of Cambridge. He has held various College offices including Tutor, Director of Studies in HSPS and sits on the VHI Committee, the Dean’s Committee and the Estate’s Committee.

He spent several years (1968-74) studying for the priesthood in the Cistercian monastery of Our Lady of Bethlehem Abbey, Portglenone, N. Ireland. He read for a BA in French and Politics at the Ulster Polytechnic (1978-82) and completed a Doctorate in Political and Social Sciences at the European University Institute, Florence, Italy (1982-85). He was appointed Lecturer and Senior Lecturer in Public Administration at the University of Ulster (1985-91), then Associate Professor in Public Administration at the Erasmus University Rotterdam (1991-94) before taking up the Chair of European Politics at Cardiff University (1995-2010). He was elected a Fellow of St Edmund’s in 2010.

His research has been recognised by a number of awards and honours. In 2010, the French Government appointed him an Officier dans l’Ordre des Palmes Académiques ‘in recognition of his contribution to French culture and language in the UK’. In 2009, he received an honorary doctorate from the University of Umea  (Sweden) in recognition of his research on European politics. He was elected a Fellow of the Royal Historical Society (2007), of the Royal Society of Arts (2008), of the UK’s Academy of Social Sciences (2008), of the European Academy of Sciences and Arts (2013) and of the Learned Society of Wales (2014). In 2005 he was an Visiting Fellow of the Royal Flemish Academy of Belgium for Arts and Sciences. The Foundation Wiener-Anspach which promotes collaboration between the Université Libre de Bruxelles and the Universities of Oxford and Cambridge appointed him to the prestigious Chaire Ganshof van der Meersch.

Professor Loughlin has acted as an expert and consultant for international organisations and national and regional governments. He has chaired expert groups on decentralization at the EU’s Committee of the Regions and at UN-Habitat and was responsible for drawing up a set of Guidelines on Decentralisation for the latter organization. He is also an expert on local government for the Council of Europe. He has advised the UK Government, the Flemish Government, the French Senate and the Northern Ireland and Welsh governments on issues of territorial governance. 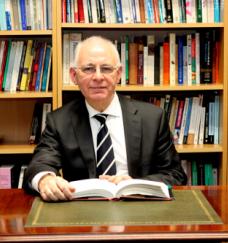